Read our most recent Newsletter! 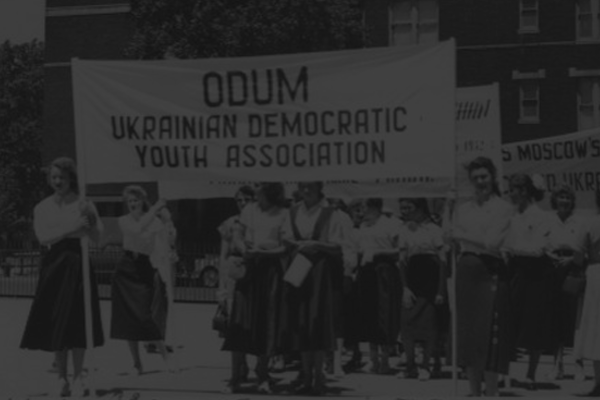 The ODUM Branch in Chicago was founded on August 6th, 1950, and its first chair was Alexander Luppo. During the first years, the meetings took place in different buildings, sometimes at St. Pokrova Church. At first choirs and drama groups were organized. In 1952, under the direction of the branch, an editorial board headed by Boris Sherstyuk and Oleksiy Konoval was created. The magazine “To the goal” began to be published. The magazine provided interesting information about the affiliate and ODUM’s life.

In 1953, the branch had to move to a house on the corner of the streets of Potomac and Artesian. The administration often filled up with new people, because the army or school detached them from the life of ODUM. Still, at least 15 people from Chicago branch were present at each meeting.

In 1959, Alexey Konoval headed the new administration. This department was assigned the responsibilities of organizing the Young ODUM. At first, there were about 30 people in the Young ODUM, and in 1964 their number was up to a hundred. The educators throughout the time were Galyna Bojko, Maria Shkrebets, Stefi Kovalchuk, Vera Nina and Olena Lukash, Tanya Sukhova, Vira Gorb, Yaroslav Merkulo, Alexey and Vasyl Konoval, Victor Bilous, Dmytro Grushetsky, Oleksiy Poshivanyk, Petro and Ivan Ivashchenky, Yevhen Tkalych and Oksana Maslovs’ka. The work with Young ODUM and adults takes place on a regular basis, weekly.

On March 20th, 1960, St. Sophia Church prior, fr. Mykola Litakivsky, with the protodeacon M. Pokotylenko blessed the affiliate’s flag. The same year, a two-storeyed building was bought for ODUM on the 2516-18 West Division Street. ODUM members, their parents, and organization’s supporters have invested thousands of hours to adapt it for use. Hundreds of people made their donations for the purchase and repair of the ODUM house. A corporation whose executive is elected every year has been created to purchase and maintain the home. On December 11th, 1960, fathers Fedir Biletsky and Mykola Litvakovsky blessed the ODUM’s home.

During the 10th ODUM Congress in New York, the U.S.A., in 1960, the branch was awarded the best, transitional bust of Simon Petliura. From that time, except for one year, it is held by the Chicago chapter.

The branch in its work devoted much attention to the artistic units. In 1959 the maiden quartet was created with its members Olena Pavelko, Maria Shkrebets, Maria Pylypenko, and Galyna Bojko. At first, the leader was Olena Pavelko, and later Anatoly Stepovy took over; he also selected the songs, wrote notes and taught the lyrics. During its existence, the quartet increased to the septet. Since its creation, Olena Pavelko, Maria Pilipenko, Galina Boyko, Maria Shkrebets (later Konoval), Stefi Kovalchuk, Katya Szibra, and Nadia Sakhno have been singing there. Vira Tarasenko, Lida Romanenko, Katya Shchibrya, Vira and Olia Gorb, Natalka Kolishins’ka, as well as Maria Konoval sang in a septet during the seventh anniversary of ODUM and its affiliate of Chicago.

Since its inception, this artistic unit of the branch has been performing at numerous congresses, meetings, banquets, concerts at universities and international performances. For their performances, they have gratitude from the city of Chicago, and from the Arab students, the trophy statue for ODUM. One of the well-known musical radio stations of Chicago set up a one-hour speech-interview for them.

Immediately after the purchase of the ODUM house, a singing ensemble of the Young ODUM was created. Now all members of the ensemble belonged to the older ODUM. They were led by Maria Konoval. The art director of the branch, Anatoly Stepovy, selected the repertoire for both the younger, and the older ensemble. The first member of the ensemble were Katya Kovalchuk, Lida Martynovich, Lyudmila Mirutenko, Lyuba Litus, Lina Stepova, Valya Poshivanik, Lucia Petrenko, Olena Kosogof, Maria Kovalchuk, and Lyuba Petrenko. Later, those who left the ensemble, were replaced by Lyudmila Revenko, Evgeniya Petrenko, Katya Yermochonok, Lida Borachuk, Maria Glybchuk, and Nina Oborkovs’ka. As of 1965, there were 5 people singing in the ensemble.

At the annual general meeting in 1962, Olexiy Poshivanyk, who served two terms, was elected to be the head of the branch. At the end of 1962, preparations for the creation of a string orchestra began. Great efforts into this organizational case were put by rev. of the branch Danylo Zavertajlo. He found 16 sponsors who bought instruments for the string orchestra. At the end of January 1963, Anatoliy Stepovy, conductor Dmitry Hrushetsky, Mandolin teacher and guitar teacher Ivan Turchmanovich began working with the orchestra. After the tragic death of Ivan Turchmanovich, Yaroslav Markevich took over teaching the guitar lessons, and later Anatoly Luppo, who was simultaneously the conductor’s assistant, took his place. Some members of the orchestra departed, while new others joined it. Now there were 51 persons in the orchestra (mandolins, guitars, and bass): Valya and Olexiy Poshivanyk, Vasyl, Natalka and Alexiy (the administrator of the orchestra) Konoval, Oxana and Lyudmila Revenko, Lida, Olya and Volodymyr Kosogof, Peter and Ivan Lysenko, Petro and Rosalie Bojko, Volodymyr Oborkovsky, Oleg Maslovsky, Vasyl’ and Olga Mirutenko, Vasyl, Mykola, and Andriy Skyba, Victor Vojtykiv, Lina and Anatolij (Jr.) Stepovyj, Grytz’ko Len’, Maria, Volodymyr, and Petro Pavlivetz’, Petro and Ivan Ivashenky, Lida and Victor Barachuky, Maria Brykajlo, Mykola Osovs’kyj, Natalka Kolishyns’ka, Maria and Anatolij Luppo, Victor Botvyn, Victor Gurtovyj, Jurij and Suzana Kostyny, Vira Sahno, Olena Serbu, Petro Rudenko, Zenon Pohodenko, Arianna, Astrida and Jaroslav Chernjavs’ki, Olexij Medvid’, Olena Radzilovs’ka, and Tamara Dmytrenko. The String Orchestra performed at the ODUM meeting in 1963 in Canada, at the concert of the 14th Congress of ODUM in the U.S.A., at three concerts of the branch, and at the opening of the monument to Taras Shevchenko on June 27, 1964 in Washington.

Almost simultaneously with the orchestra, a string quartet was created under the direction of Anatoly Luppo. After Dmitry Hrushetsky and Ivan Turchmanovich’s leaving, it was joined by the following people: Anatoly Luppo (leader), Yaroslav Markevich, Alexei Poshivanik, Mykola Osovs’ky, Mykola Skyba and Volodymyr Kosogof. This ensemble gained good fame for concerts and other performances.

At the end of 1963, a dance team was created at the branch, which was headed by ballet master Mykola Osovs’ky. It included Lina Stepova, Luzya Petrenko, Valya Poshivanik, Katya Kovalchuk, Galina Dovvoshya, Lida Bezpalko, Petro and Ivan Ivashchenky. In October 1964, Ivan Ivashchenko began teaching folk dances as the youngest group, which would further be taught by Peter Ivashchenko.

At the end of 1964, the branch, thanks to the efforts of Danylo 3avertajlo, created an ODUM ensemble of bandura players. He was led by well-known bandurist and composer Grygorij Kytastyj. In the ensemble, besides many singers, there were 38 people with banduras. For the first time, bandura band performed at Shevchenko concert on April 4, 1965 at Chopin school. The bandurist group of the branch: Alexei Poshivanik, Petro and Ivan Ivashchenky, Ivan Serbu and Oleg Maslovskyy repeatedly performed at the festivals and holidays of the Ukrainian organizations in the city of Chicago.

The Chicago Branch of ODUM has always made great efforts to ensure that the ODUM magazine “Young Ukraine” would stand on the best possible ground both in ideological and material ways. Therefore, thanks to loyal ODUM members, representatives of the magazine, Pavlo Konoval, Ivan Kozatsky, Danylo Zavertajlo, and Aleksey Konoval, Chicago always had the largest number of subscribers. In 1965, in Chicago and its vicinity, more than 150 people received the magazine. The branch annually transferred the collections for the press fund and caroling, and recently it has started to make one impression annually, the profit from which would be assigned to “Young Ukraine”.

In 1961, the branch started issuing a wall paper called “SMIH-0-DUM”, whose editor was Alexij Konoval. The short texts were depicted with cartoons by Jaroslav Merkelo, Stefi Kovalchuk, Tanya Sukhovaya, Vasyl Konoval, Maria Pavlivets, and most of all by Alexey Poshivanik, who designed programs and flyers and worked on a token for the anniversary ODUM meeting and the opening of the residence.

The ODUM Branch in Chicago has grown and intensified thanks to the comprehensive help of its loyal worker Anatolij Stepovyj, ODUM’S Honorary Member, who, during the existence of the branch, was the artistic director of all the affiliate branch, string orchestra conductor and themandolin teacher. He wrote the notes for singing ensembles, taught singing, reciting, sketching etc.

Every year the members of the branch actively participated in all demonstrations, holidays, academies, funerals, feasts, meetings, congresses, meetings with our prominent politicians, such as Dr. Stepan Vytvits’ky, the president of the UNR, the head of UNRada and the famous Ukrainian writer Ivan Bahryanij, Head of the UNRada Mykola Livyts’ky and others. The branch arranged many evenings with an artistic program devoted to political figures, writers, poets, scholars such as Symon Petliura, Mykhailo Grushevsky, Lesya Ukrainka, Taras Shevchenko, Alexander Oles’, Ivan Bahrianyj, Mykhajlo Sytnyk, Hryhori Kytastyj, Anatolij Yurynjak and others.

Each year since the very beginning of the branch New Year’s meetings have been held.

By the 15th anniversary of the branch’s existence, a new administration was chaired by Vasyl Konoval. It included the people who used to be the members of the Young ODUM.

View our photos and videos from events, activities, fundraisers and volunteering events.

Stay in-the-know with news updates from ODUM Chicago and other affiliated organizations.